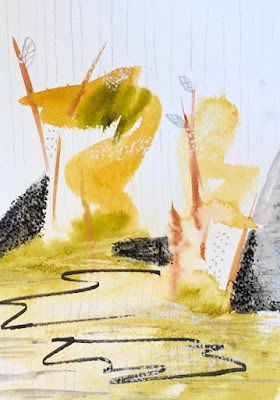 Yesterday I used up the last of my large sheets of watercolor paper, so I'm now working even smaller.

I've decided to eliminate the collage element of this exercise and just focus on brush strokes and mark-making, but my sense-making brain still wants to turn everything into something recognizable -- in this case, two workers planting in a rice paddy in the rain...

I'm particularly drawn to the figure on the left, who feels elderly and stooped to me -- and if, as usual, I view what appears as a symptom of what's currently occupying my subconscious, I'd have to say the issue is around aging.

My husband is reading Atul Gawande's Being Mortal, which he himself recommended for his reading group, but he's finding it to be tough going. He's been sharing some of the stories in there with me, plus he's reading daily statistics and stories about the effects of CoVid -- which means both of us are having to wrestle with the realities of aging, disease, and death.

Plus I have a dear friend who recently suffered a mild stroke (though she seems to be recovering nicely) who is now facing the reality that she may no longer be able to care for her husband, who is moving into dementia.

So when you put that all together with the birthday I have coming up -- which brings me to within less than five years of my parents' ages when they died -- well... it's not surprising that things feel a little bleak. So far we've been fortunate, health-wise, compared to many of our friends, but past a certain point we understand continuing that trend will prove to be an increasingly unlikely scenario.

But I intend -- as this painting declares -- to continue planting and harvesting words and images as long as that remains feasible. In fact, I've just ordered a roll of paper so that I may embark on a new series of mark-making exercises. I guess -- as Salinger said in Franny and Zooey -- I'm determined that it won't be over until the fat lady sings. Note -- there are no fat ladies, or musical notes, in this picture!
Email Post 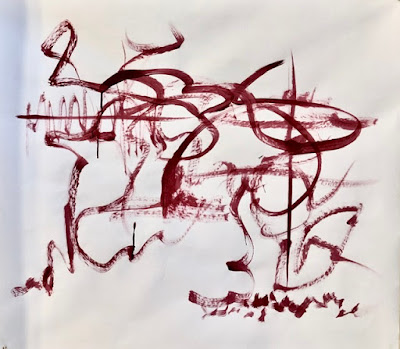 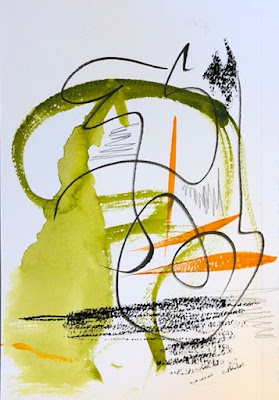 Seeking a path through the chaos

Diane Walker
Diane Walker is an artist and writer who lives on an island in Washington State.